Guide to Countries with Skilled Tech Talents in 2023

Well, as we live in the digital world, almost all of these companies require a development team. Businesses that fully utilize technology tools earn twice as much revenue per employee, experience nearly four times the annual revenue growth, and are nearly three times more likely to create jobs in the coming year. So where to find such a good team for your enterprise company or at least a couple of mastered engineers for your small business?

Let’s dive into a pocket handbook to Skilled Tech Talents in 2023: developers from which country will be best matched to your company and why Eastern European ones are suited to almost all types of business’ requirements.

The USA and Canada are thriving sectors in North America. These countries have their own benefits and disadvantages. Of course, for enterprise companies high prices aren’t a problem but what if something happens like Covid-19? Hmm, it was. Sure, this horrible pandemic situation affected businesses, too. So, even some large companies couldn't afford a full-cycle development team from North America at that time. Here is a closer look back to the US and Canada:

Because of its smaller population and unassuming reputation cut to the US, Canada frequently fades into the background. However, there is much to be said about Canada's potential gold mine, particularly in terms of tech talent and the opportunity to employ top talent at a lower cost while remaining in North America.

The Waterloo Economic Development Agency reports that the Toronto-Waterloo corridor is home to 15,000 tech companies, including 5,000+ startups, and more than 300,000 high-tech employees.

The biggest disadvantage here, now and for the next year, is the vast time difference. When you have teams that are 6 to 12 hours apart from your local team, it can have a negative impact on your projects. This can lead to problems and delays because communications can break down easily and time is wasted waiting for days-late responses.

South America's IT sector has grown at an exponential rate in recent years. The key driver in this region, as in Eastern Europe, is a growing pool of tech talent, with the added benefit of proximity to North America. IT development hotspots in this region include such large destinations as Brazil and Argentina.

The time zone difference between North American and Latin American countries is negligible, allowing both sides of the offshore software development partnership to operate during regular business hours. While nearly complete overlap in working hours reduces the effort required for coordinating work across time zones, it eliminates the benefit of continuous development found in Eastern Europe.

According to Coursera research, Argentina was ranked #1 in the Global Skills Index due to its world-class education system (2019). To propel the industry forward, educational institutions in the region provide a plethora of information technology courses.

Argentina stands out with advanced English proficiency among adults, while the rest of the countries in the region offer intermediate or pre-intermediate proficiency. It may be more difficult to find software developers who speak English fluently, which, as you know, is critical for alignment with your offshore development team.

Africa is a newcomer to the market of software offshoring. Currently, Africa's IT job market is far from being a development hotspot like that of Eastern Europe or Asia.

According to Accelerance data, the most promising countries leading the continent's IT industry are South Africa, Egypt and Morocco. The average hourly rate here is $20 per software engineer.

Because the job markets in those countries are less saturated, it is difficult to find highly qualified developers at reasonable prices. Tunisia and Morocco are popular destinations for French-speaking countries, while the rest of the continent is home to a large Arabic and English-speaking talent pool.

Asia continues to be one of the leading regions for IT outsourcing. As the densely populated region has hundreds of thousands of IT-specialists, there are many companies that are solely engaged in providin

g obedience to offshore software development. The Chinese government encourages the IT industry by offering economic incentives and investing in technology parks where offshore developers can grow professionally.

Because of the high supply, offshore software developers can charge relatively low rates, which is the region's most significant advantage. They range in price from $20 to $45.

At the same time, the large time difference is a significant disadvantage, though many Asian developers are willing to work at night. Another issue that can make communication difficult is significant cultural differences. In this regard, European nearshore companies have an advantage.

Western Europe has some of the highest hourly rates in the world, comparable to the United States. These countries have high economic development, political stability, a developed tax system, and, as a result, high living standards. Offshore developer rates in Germany, France, and the United Kingdom, for example, range from $50 to $100, while the same services in Switzerland countries can range from $100 to $200.

Germany has the highest number of software developers in Europe, thanks to a well-thought-out labor migration policy, high-quality education, and stable economic growth. The development of the French IT sector lags behind that of the rest of Western Europe. Junior programmers earn $35,000 per year, while senior developers earn $67,000. This pay disparity indicates a lack of development in the IT sector, which is generally advantageous to entrepreneurs seeking high quality at a more reasonable price of $50-99 per hour for the software development.

After Germany, the United Kingdom has the second highest number of IT specialists in Western Europe. Their average annual salary in the UK is slightly lower than in Germany, with an annual salary of around $47,000. However, the hourly rate for offshore software development is higher. Well-known and recognized companies can charge up to $200 per hour.

Here you can hire highly qualified developers at lower rates without sacrificing product quality. The density of software developers in this region is very high - 1.3 developers per 100 working people, for a total of approximately 1 million software developers. An impressive figure for such a small region's IT industry. Software development hotspots in the region include: Ukraine, Poland, Czech Republic, Hungary, Bulgaria and Romania.

Eastern Europe has a strong technical education system that produces thousands of degree holders each year with a strong background in Mathematics and Engineering. The time zone difference between Eastern Europe and North America can range from 5 to 12 hours ahead, allowing for at least 3 hours of overlap, which is a solid time window for real-time communication. In fact, many developers prefer to start their workday a few hours earlier to better align

Software programming rates in Eastern Europe range from $25 to $100 per hour, according to Accelerance. It's worth noting that countries like Ukraine, Moldova, and Bulgaria are more affordable due to lower living costs. According to Clutch.com data, an aggregator of offshore software development agencies, the average hourly rate for software development in Czech Republic, Bulgaria, Romania, and Moldova is $25-49, not including taxes and fees associated with an offshore software product development provider. In Ukraine, Poland and Hungary, such companies charge between $50 and $99 per hour.

Poland shares geographical and cultural ties with Ukraine. However, offshore programmers in Poland have slightly higher rates than their neighbors. However, it still corresponds to the average level in Eastern Europe, which is around $35-55. The higher cost per hour can be explained by the country's higher standard of living and good technical education.

The Ukrainian IT sector provides high-quality development at a reasonable cost. 11 Ukrainian companies were placed among the world's top 100 IT outsourcing firms. As a result, Ukraine is one of the best countries in the world for IT development, and not just in Eastern Europe. A bachelor's degree is held by at least 80% of Ukrainian developers. Same percent of Ukrainian developers have intermediate or higher English proficiency, according to the EF English Proficiency Index, which is sufficient for participation in software development roles.

Despite the challenges posed by martial law imposed by a neighboring aggressor country, software development in Ukraine remains a driving force in the country's economy and is rapidly expanding and will continue growing in 2023. The contribution of this industry to the country's GDP is gradually increasing.
But no matter where Ukrainian Developers are based at the current moment - they still have all the perks of being an Eastern European Engineer. 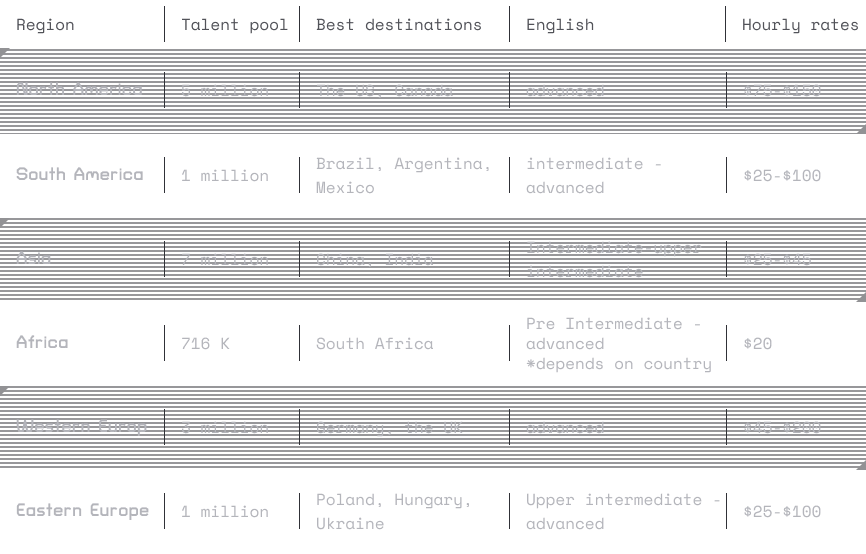 Eastern Europe is literally a shiny diamond when it comes to hiring tech specialists. Every day, developers from this region demonstrate their deliverability by providing the best service. Wonder, where to find a Eastern European developer and be sure that he is a senior one with a good price? Find Skilled Tech Talents in 2023 with Devler 😊

Devler.io is exactly such a platform for matching great products with vetted developers from our Dev’s League. Here you can meet an impressive cost-value ratio backuped by experience and efficiency - just a couple answers from you in this form and we will contact you as soon as possible.

Hiring an offshore software development team might be one of the most convenient ways to build your product. Let’s explain all the tricks: from the main reasons you should hire offshore teams to what are the benefits of this. Moreover, following steps on this topic is an accurate instruction you should notice.
Hiring
Remote
Guide
Oct 24, 2022

How much does it cost to hire software developers in Eastern Europe in 2022?

Eastern Europe it’s a region with highly skilled software developers. For sure, there comes a question “how much does it cost?”. Let’s take a fair review on prices of development services in this geographical area.
Hiring
Remote
Guide