List of software languages and frameworks that Devlers use are not strict and can be expanded any time. Still, Ruby and Rails framework, JavaScript and its React, Angular, Node and Swift for  iOS development are not only trendy and popular technologies but have a lot of pros to use in projects thanks to their flexibility and maintenance later. So what are the other main benefits of using such technologies and frameworks? Or it should be better to include another ones in our tech stack?

Before we start, let’s look at some stats. According to Statista research we can see that such languages as JavaScript, Ruby, Swift didn't lose their positions. For entrepreneurs and business owners it would be good to know that some languages are great for some specific needs. For example, JavaScript, TypeScript, React and Angular are great for creating a front-end part: interfaces and their interactions between. Ruby and its framework Ruby on Rails are the best for backend development, building difficult systems.

Most used programming languages among developers worldwide, as of 2021 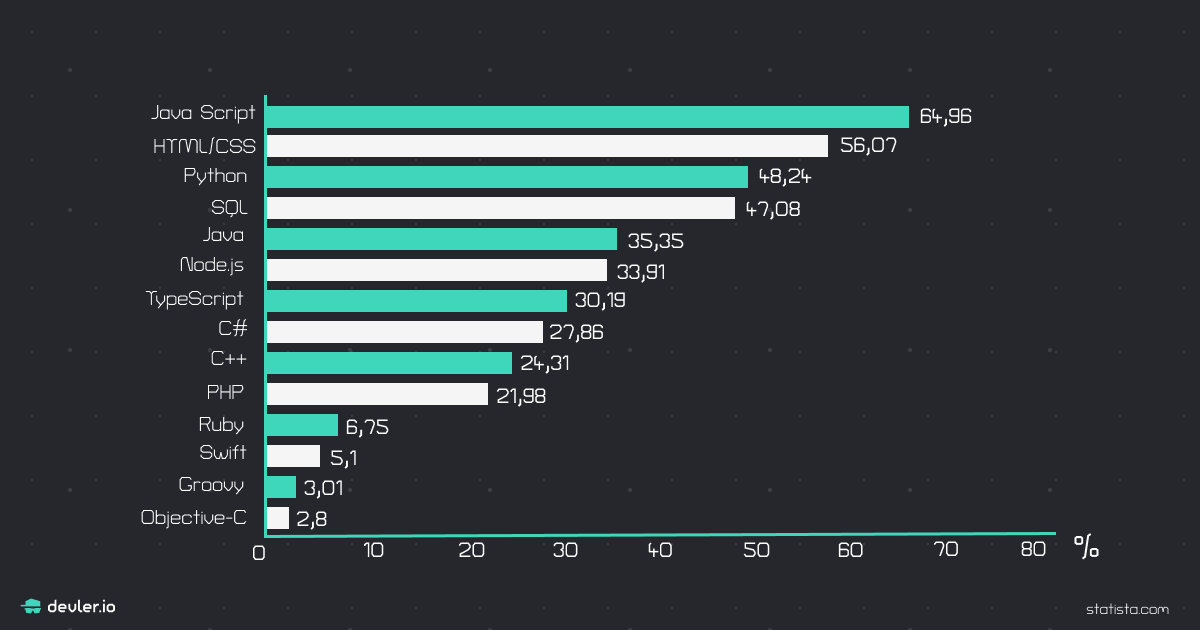 Whenever you are a developer who are considering to switch your career way or become a full-stack one or you are a founder who are on the way to hire professionals to bring your idea to life it should be useful to look over some brief information about popular languages technologies:

Let’s begin with Ruby itself - it’s an interpreted and fully object-oriented language with human-friendly syntax. Ruby on Rails (RoR) is a framework implemented in Ruby. Ruby and framework are always on the rise among developers and on the 6th top-paying languages.

Thanks to efficiency and scalability Ruby on Rails allows writing rich functionality with much less code lines compared to Java, for example. Ruby on Rails is a great choice when it comes to building a web application (both front and back sides) or MVP and CMS development and it’s perfect match for tech needs in such areas as eCommerce, Healthcare, Retail and FinTech.

Sure, you heard about companies Twitch, Shopify, Tumblr, Starbucks - their apps built using Ruby on Rails.

React is an amazing JavaScript library which makes the whole development process much easier and allows to build efficient online applications. Most of the big and middle companies such as Netflix, Uber, Airbnb are leveraging ReactJS development services to design their web interfaces. Meta, formerly Facebook, initially created and maintained ReactJS.

ReactJS is one of the top popular frameworks to learn and work with due to the fact that it can be easily used to create aesthetically pleasing and interactive user experiences and increases developer productivity.

Instagram, Skype and Uber Eats applications are built with React Native and this list is not ending. Now many companies adopt React Native in their apps so learning this framework could not only just make your salary bigger but be in a strong position on the service market.

Angular is an open source framework based on JavaScript which was created by Google.

It is a powerful resource that will aid you in creating flexible user interfaces to access the full power of your cloud-based product, single page websites or mobile applications. Moreover, AngularJS is supported by multiple systems.

Such companies as Samsung, PayPal, Delta Airlines use AngularJS to build their applications.

NodeJS is a server-side JavaScript environment that is used to develop a wide range of web applications. NodeJS makes it easy to build fast and scalable products, which is ideal for growing companies. This platform has recently gained popularity among both developers and companies. Developers like to work with NodeJS because it makes use of an efficient and straightforward input-output model that is ideal for real-time and data-based applications.

For companies using NodeJS is perfect when it comes to building dynamic websites and apps. NodeJS used for creating Trello, Walmart's app, Twitter, LinkedIn and eBay.

Swift is a programming language released by Apple. It allows you to build apps for Mac, iPhone, Apple Watch and the iPad so most apps on the Apple App Store today were written on Swift. Furthermore, Apple made Swift available to Windows and Linux so its become cross-platform language. If you are a developer you should know that Swift is one of the most in-demand and popular languages companies seek.  Moreover, it’s the only dynamic language with an integrated development environment which is specifically designed for iOS development.

Except Apple, Swift is used by Coursera, Eventbrite, Khan Academy and Kickstarter. So companies choose Swift because this language is fast, robust and expressive.

Wrapping things up, it’s no no longer a question why software engineers at Devler.io are using exactly the languages and frameworks mentioned above. All of them have their own features which allow to build fast, trendy and easy maintenance apps.

Whenever you are a beginner in your journey to become a developer or you are a qualified one you know you are on the right path and what will always be in high positions in the service market.

If you are a company, sometimes it’s hard to understand the right tech stack to develop your product. We are here to help! Devler.io is a platform where you can find vetted software developers from Eastern Europe and who are masters in what they do. You can be sure you have a deal with a professional developer if you work with Devler.io.

Overview of software developers in Latvia

When it comes to hiring a developer, Latvia is one of the jewels of Eastern European countries. Keep reading to learn more about software development in Latvia.
Hiring
Remote
Guide
Nov 30, 2022

Hiring an offshore software development team might be one of the most convenient ways to build your product. Let’s explain all the tricks: from the main reasons you should hire offshore teams to what are the benefits of this. Moreover, following steps on this topic is an accurate instruction you should notice.
Hiring
Remote
Guide